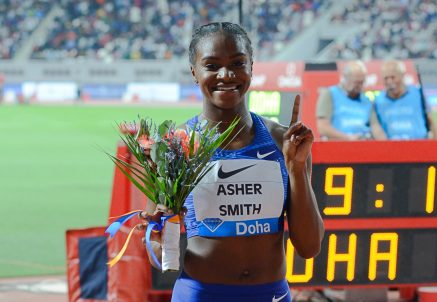 30th May 2019 – It appeared Stockholm had not received the memo that the summer athletics season is here as athletes were met with cold at blustery conditions for the latest leg of the IAAF Diamond League at the historical Olympic Stadium.

One athlete who was unperturbed by the challenging weather was Dina Asher-Smith (GBR) as she took her second 200m win of the season and again set a new world leading time of 22.18 seconds in the process. Jenna Prandini (USA) was fifth in 23.09 seconds.

As always Bethwel Birgen (KEN) gave a good account of himself in the men’s 1500m, taking fourth place in 3:39.18 after some erratic pace making early on. Bralon Taplin finished seventh in the men’s 400m and Timothy Toroitich was tenth in the 10,000m. After a stressful day due to events away from the track Michael Rimmer (GBR) did well to take third place in the men’s 800m B race.

Hellen Obiri (KEN) was unfortunately tripped with just over 1km to run in the women’s 5000m and despite picking herself up an insurmountable gap had been opened and she jogged across the line in twelfth place. Fortunately, early signs show she has not suffered any serious injury and she will be back battling for first position again very soon.