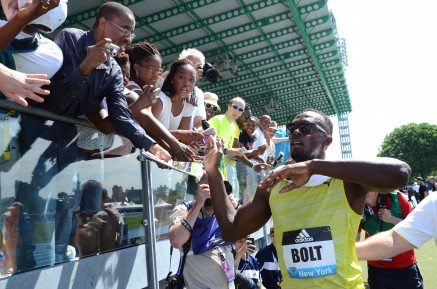 After the race Usain was heavily critical of himself saying he did not get a good start and “ran the worse bend of his life” but he still did enough to win the race in 20.29 seconds while running into a stiff head wind.

World Championship 1500m silver medalist Matthew Centrowitz (USA) stepped down to the 800m here and smashed his PB by over a second to take fourth position in 1:44.62. Commonwealth 10,000m champion Moses Kipsiro (UGA) made a welcome return to the track taking fifth place in the 5000m in a hotly contested last lap kick.

Mary Cain (USA) finished fourth in the 1000m and Schillonie Calvert (JAM) sixth in the 100m.

At the IAAF World Challenge meeting in Rabat, Vivian Cheruiyot (KEN) showed she is continuing to progress with another solid run of 8:39.75 for second place in the 3000m.

In London, Jemma Simpson (GBR) took second place in the Amba Hotels Road Mile event and Tom Lancashire (GBR) was third in the mens race. One day earlier Tom won a 1500m in Ireland in 3:40.