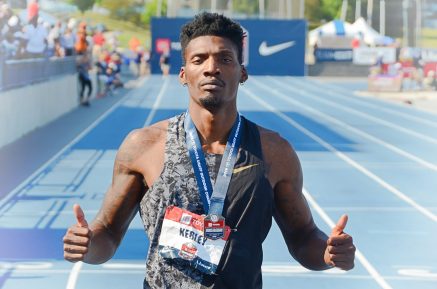 24th January 2021 – It’s been a long time coming but finally there was a return to top level athletics in the US at the weekend.  The launch of the 2021 American Indoor Track League was a much-needed boost for the sport and PACE athletes were not going to let the opportunity pass them by.

While every athlete has had to be patient, Trayvon Bromell (USA) deserves a special mention as he has overcome numerous injury setbacks that could well have caused lesser athletes to throw in the towel, but in less than seven seconds on Saturday afternoon he made the all the hard work and sacrifices worthwhile with an eye-catching display in the 60 metres.  Having comfortably won his heat in 6.58 seconds he was in a class of his own in the final, winning in 6.48 seconds, a time just 1/1000th of a second slower than when winning the World Indoor title in 2016.

Fred Kerley was also keen to show that he is in great shape as he led the 400m from gun to tape.  Already the holder of one of the fastest ever times indoors, Fred split 21.03 at the bell and was never in danger of being overtaken as he crossed the line in 45.03 seconds.

Jenna Prandini (USA) took the opportunity for some over distance work as she ran the 300m, stomping her authority on the race early Jenna won her heat in a personal best time of 36.68 seconds to take second place overall.  Shamier Little (USA) also took second but in the 400m with a time of 52.63 seconds although with a clearer run she is certainly in shape to run a lot quicker.