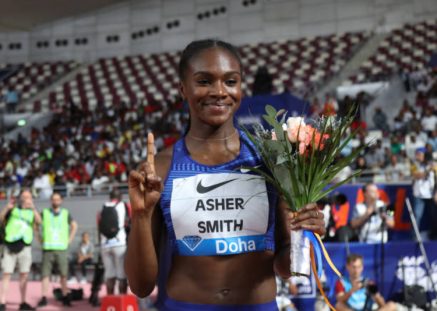 23rd May 2021 – At the first World Athletics Diamond League meeting of the season, Dina Asher-Smith (GBR) had to not only overcome a world class field, she also had to contend with horrendous conditions as the weather gods did not shine on the Gateshead Stadium.

However, Dina was not deterred by ‘a bit’ of wind and rain and was a convincing winner of both her heat and then the final.  With a headwind of -3.1 m/s in the final times were irrelevant, but Dina was delighted to take the win in front of her passionate home crowd and give them fair reward for their own resistance to the elements.

At the Boston Games, held on a specially constructed track down Boylston Street, Shamier Little (USA) contested the rarely run 200m hurdles.  Once again Shamier gave a very strong performance as she ran inside the previous World Best for the event. On the day it earned her second place in 24.91 seconds.

Earlier in the week at the Golden Spike Meeting in Ostrava, Fred Kerley (USA) tackled the 100m and 200m double and came away with a first and second place.  First up in the 100m, Fred got a great start and held off a world class field to take the win.  He backed up his recent sub 10 clocking in the US with another one here, as he ran 9.96 seconds.  Just a short while later he was back on the track again for the 200m and although he had to settle for second on this occasion he showed the great shape he is in by clocking 20.27 seconds, just outside his PB.