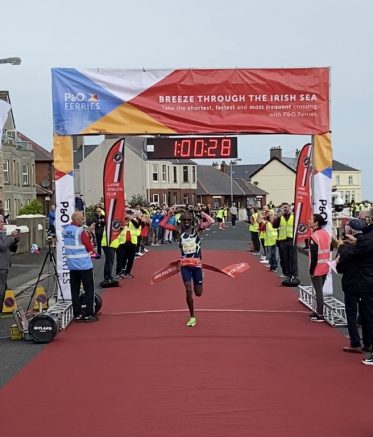 12th September 2020 – Just one week after breaking the World 1 Hour record on the track, Sir Mo Farah (GBR) was back breaking records on the road.

The team at the Antrim Coast Half Marathon had done an incredible job to ensure their race went ahead, but not only that they had assembled a high-quality domestic field to do battle along the scenic route.  The athletes duly rewarded them with a fine race that was still up for grabs into the last mile.

However, just before the sharp decent into the finishing straight Mo moved into the lead and with his customary display of speed and power in the final stages went clear to win in a new Irish All-Comers record time of 60:31.

On the track World 200m Champion Dina Asher-Smith (GBR) starred at the first DASH meeting, a series of races that Dina is helping to organise herself, as she won the 150m in 17.12 seconds.

At the World Athletics Challenge meeting in Berlin, Shannon Rowbury (USA) ran a season’s best, and indeed her fastest 1500m for four years, as she clocked 4:02.56 for fifth place.