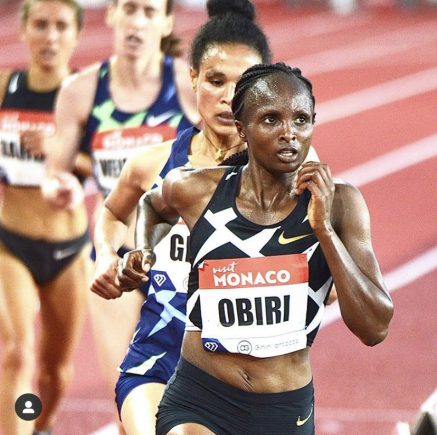 14th August – There was a sigh of relief from all interested parties as finally the 2020 World Athletics Diamond League series got underway in Monaco on Friday night.  A huge amount of credit should be given to the organisers for making the event happen, and the athletes across the board repaid them in the best way possible with some incredible performances.

World Champion Hellen Obiri (KEN) was straight back into her old routine as she was always to the fore in the 5,000m.  As the pace increased and the lead group dwindled Hellen showed her experience to sneak through on the inside on the last lap before striding confidently away to win in 14:22.12.  Shannon Rowbury (USA) recorded her seconded fastest 5,000m ever with 14:45.11 for fifth place.

Ciara Mageean (IRL) continued her record-breaking form with her second Irish record in as many races.  Running 1000m on this occasion, and despite being slightly checked on the back straight of the final lap, Ciara finished very strongly to take third place in the race and set new figures of 2:31.06.  This was not only an aforementioned Irish record but also a PACE record for the distance.

Earlier in the week at the Star Athletics Sprint Showcase in Montverde, Trayvon Bromell (USA) continues to get faster with each race as he won the 100m.  Trayvon ran a legal 9.99 seconds in his heat before winning the final in a wind assisted 9.87 seconds.

Shamier Little (USA) had a successful outing at the Prairie View meet in Texas, as she finished second in the 400m before winning the 200m later in the day.