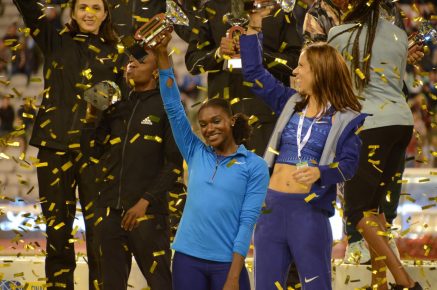 6th September 2019 – Dina Asher-Smith (GBR) gave herself the perfect send off to the IAAF World Championships later this month with victory at the final Diamond League event in Brussels.

Racing over 100m where the athletes had earned the opportunity to run by accumulating Diamond League points all season, Dina was quick out of the blocks and despite coming under pressure from Shelley-Ann Fraser-Pryce stayed strong (and fast!) through the line to win in 10.88 seconds. This was Dina’s second fastest ever time (only behind her performance when winning the European Championships last summer) and earned her a first Diamond trophy.

There was an exciting finish in the men’s 400m with the outcome only decided in the last few strides. Fred Kerley (USA) finished second on this occasion in 44.46 seconds but showed again that he will be in the mix when the medals are decided in Doha. Matthew Hudson-Smith (GBR) got another solid performance under his belt finishing second in the 400m invitational in 45.63 seconds.

Hellen Obiri (KEN) was looking to win the 5000m title for the third year in a row. After a relatively slow first 3000m the race gradually wound up with some very fast last laps. Hellen took fourth place on this occasion in 14:33.90.

Bethwel Birgen (KEN) and Vincent Kibet (KEN) have been regular participants on the Diamond League circuit and both qualified for the 1500m final. They finished 10th and 12th respectively here in 3:37.48 and 3:38.76.