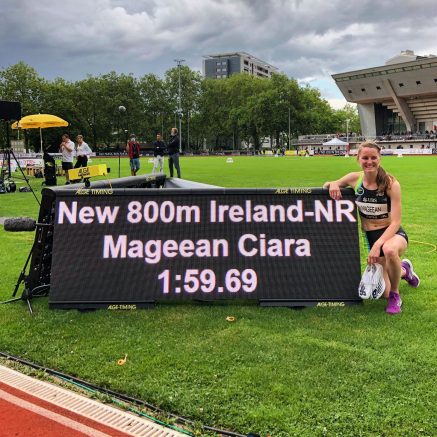 26th July 2020 – Despite the circumstances in the world just now, athletics meetings are taking place and PACE athletes are doing their best to make the most of the opportunities.

Ciara Mageean (IRL) made history on Friday as she became the first Irish woman to run sub 2 minutes for 800m.  Running at the Citius meeting in Bern, Switzerland, Ciara went through the bell a fraction inside 60 seconds.  Moving closer to the lead up the back straight, she hit the front with 180m to go and showed good strength and speed on the run in to take victory and record the figures of 1:59.69.

Trayvon Bromell (USA) made another huge step forward in his comeback as he clocked 9.90 seconds to win his 100m heat at the Back To The Track meet in Clermont, Florida. This was the first time Trayvon has run sub 10 since 2016 and is further reward for his perseverance and positive attitude to overcome injury.  At the same meeting European 400m champion Matthew Hudson-Smith (GBR) improved his 200m PB to 20.60 seconds as he won his heat.

Shannon Rowbury (USA) also ran a new form of PB, in her case a post-baby one.  At a meeting arranged by her coach Pete Julian, Shannon won the 3000m in a world leading 8:40.26.