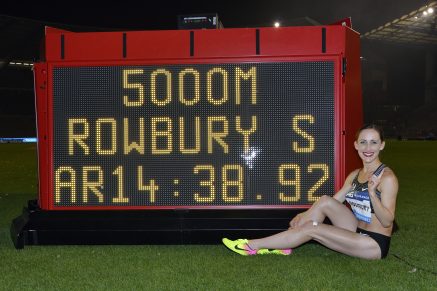 9th September 2016 – Shannon Rowbury (USA) added another American record to her resume, this time the 5000m at the final IAAF Diamond League of the season in Brussels.

Shannon has enjoyed a fantastic end to her season, running her second and third fastest times ever over 1500m (which included a victory in Zurich) and was almost metronomic on the record pace here for the first 3k. Depsite losing a bit of time in the fourth kilometer Shannon was able to close hard (covering the final 800m in around 2:15) to set new figures of 14:38.92. This means she now holds the American records for 1500m, 2 miles and 5000m.

Running just a little ahead of Shannon, Olympic silver medallist Hellen Obiri (KEN) was also in the process of smashing her personal best. In only her first season of really racing 5000m Hellen finished second in a time of 14:25.78 to become the second fastest Kenyan woman ever over the distance (only behind fellow PACE athlete and Olympic champion Vivian Cheruiyot) and go to number 8 on the all-time list.

In the mens 1500m, Vincent Kibet (KEN) and Bethwel Birgen (KEN) rounded off a busy end of season for them. Vincent placed seventh in Brussels in a seasons best time of 3:33.56 with Bethwel taking eighth in 3:34.03. This followed on from both of them racing in Zagreb on Tuesday where Vincent finished second and Bethwel sixth again over 1500m.