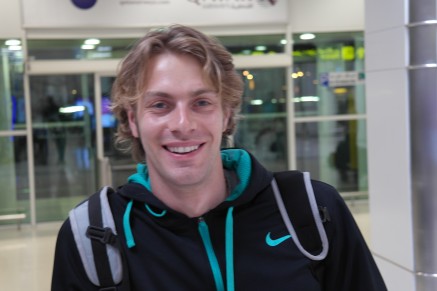 With the London 2012 Olympic Stadium currently undergoing refurbishment the event was moved to the picturesque surroundings of Horseguards Parade. For the second time in three days Chris jumped 7.94m in the Long Jump which was enough for victory. Defending Commonwealth Champion Andy put recent injury troubles behind him and showed that he can make a strong defence of his title as he won the 110m hurdles B race in a time of 13.49 seconds.

The meeting also staged road races up and down The Mall and in the shadow of Buckingham Palace Emmanuel Bett made most of the running in the mens 2 mile event but had to ultimately settle for third place. Scottish representative for the Commonwealth Games Stephanie Twell (GBR) was 7th in the womens 1 mile event.

Kimmari Roach (JAM) made a successful return to Sopot in Poland. Having been there earlier in the year for the World Indoor Championships, Roach was this time in outdoor action and he won the 100m in a time of 10.29 seconds. Diane Cummins (CAN) was fifth in the 800m.