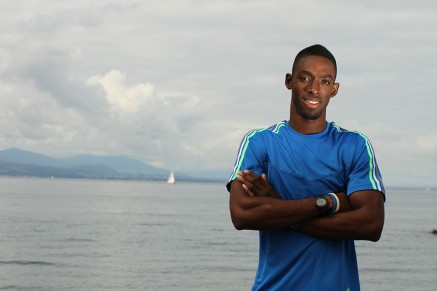 12th July 2014 – Olympic and World Championship Gold medalist Kemar Bailey-Cole showed that he is starting to peak again just as a major championship is approaching with a convincing win in the 100m B race at the IAAF Diamond League in Glasgow.

Bailey-Cole led after just a few strides and powered away from the field over the final 40 metres to take victory in 10.03. Fellow Jamaican Commonwealth Games representative Kimmari Roach (JAM) was second.

In a very competitive mens 800m that saw World Record Holder David Rudisha return to the UK for the first time since London 2012, Michael Rimmer (GBR) achieved the seasons best and European Championships Qualifying time that he was looking for. As in the British Championships two weeks ago, Michael finished strongly to take third in 1:45.89. Stepping down in distance was World Championship 1500m silver medalist Matthew Centrowitz (USA) who finished just behind Rimmer in fourth with a time of 1:46.12

Another athlete stepping down in distance was Jordan Hasay (USA) and she was rewarded with a new PB of 4:07.70 for 1500m.

Over in Ireland at the Morton International Games Vincent Letting (KEN) was eighth in the mile running a PB and breaking 4 minutes for the first time.