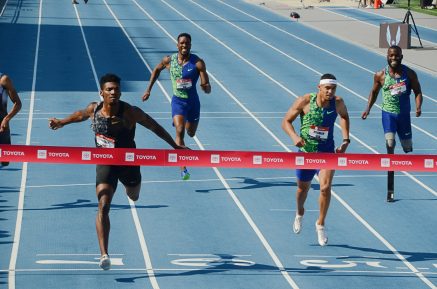 28th July 2019 – The US National Track and Field Championships (which doubles as the World Championships Trials) always ensure some of the highest standard of performance and some of the most competitive events to be seen anywhere. The 2019 edition held in Des Moines, Iowa, proved to be no exception.

Men’s 400m running is one such event where the US always has incredibly high quality and depth of talent. Yet only one athlete can be crowned champion and for 2019 that athlete is Fred Kerley (USA). Having won his heat in 45.09 seconds, then securing his place in the final with 44.09 seconds, Fred saved his best for the final itself, producing one of the performances of the meet to take the title in a new PB of 43.64 seconds, a run which puts him seventh on the all-time list.

If anyone wants advice on how to run US trials then you could do worse than talk to Matthew Centrowitz (USA). With five titles and two runner-up places in the last 8 years (didn’t run in 2014) he has a proven track record! Matthew duly continued his streak by taking a hard earned second place again in 3:44.97 and booking his ticket to Doha.

The race of the meet was the women’s 400m hurdles where Dalilah Muhammad set a new world record. Shamier Little (USA) was in contention all the way and finished fourth in 53.91 seconds.

Shannon Rowbury (USA) is a former World Championships medallist and on the comeback trail after the birth of her daughter. She took sixth place in the 5000m. There was disappointment for Jenna Prandini (USA) who having won her 100m heat had to withdraw from the meet through injury.