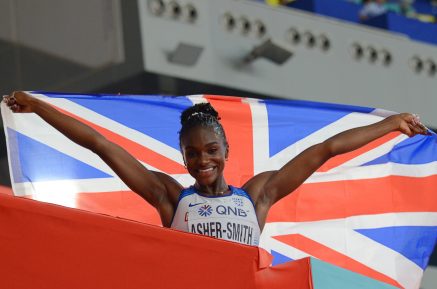 2nd October 2019 – As a History graduate Dina Asher-Smith (GBR) is all too aware of the significance of certain dates and important events.

Well, now she has created one of her own as the 2nd October 2019 will be the date that she became the first British woman ever to win a world short sprint title.

Dina’s performances in the first two rounds of the 200m made her the heavy favourite but she handled the pressure in the final and delivered a performance that not only earned her the gold medal but also a new British Record of 21.88 seconds. It was the perfect bookend to Dina’s individual season (she still has the relay to run) that started with a 200m victory at the Khalifa International Stadium in Doha and ended in exactly the same way. In years to come it is the latter that will be referred to as History.

Dina’s gold was the finishing touch on a productive night for PACE athletes that saw Fred Kerley (USA) win his 400m semi-final, Hellen Obiri (KEN) win her 5000m heat and Winny Chebet (KEN) advance to the next round in the 1500m.