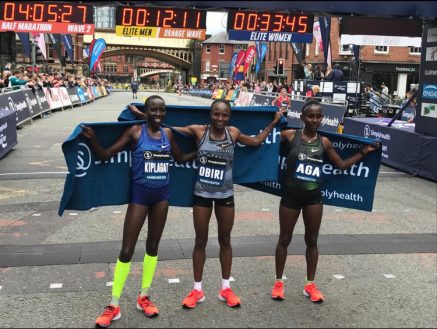 19th May 2019 – It has been a busy year so far for Hellen Obiri (KEN) but despite the surfaces and the distances changing one thing remains consistent, she keeps winning!

This time is was on the road at the Great Manchester 10k. Fellow PACE athlete Steph Twell (GBR) took the early lead and reeled of km splits in the 3:15 region. Shortly before halfway Hellen tested the field and reduced the size of the lead group and then from halfway pushed on again to break clear.

Hellen ran the first half in 15:56 and the second half in 15:27 to take victory in 31:23. Steph also continued her good form by taking fourth place overall and being the leading British athlete home in a time of 31:41.