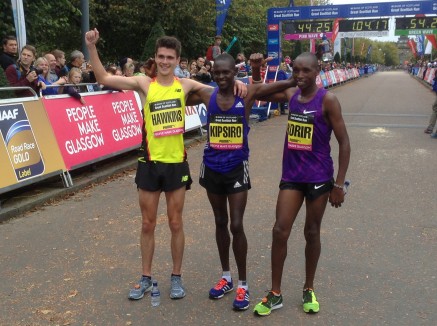 4th October 2015 – Just over a year after he defended his Commonwealth 10,000m title at the games in Glasgow, Moses Kipsiro (UGA) returned to the Scottish city to take another victory, this time in the Great Scottish Run.

In only his second race over the half marathon distance, Moses looked comfortable and relaxed as the lead group was whittled down to four through eight miles. With three miles remaining Moses decided to test the field and found only local man Callum Hawkins could come with him. One more increase in pace though saw Moses move clear and stride away for a 24 second victory and new personal best figures of 62:18.

Doris Changewyo (KEN) ran the second fastest half marathon of her career as she took second place in the womens race. Kenyan compatriot and two times world marathon champion Edna Kiplagat put in an early change of pace and Doris was the only one who tried to go with her. Although not able to run with Kiplagat this did help Doris establish herself in second place. However, running alone left her open to attack as the British duo of Gemma Steel and Jo Pavey chased her down in the final stages but Doris stayed strong till the end crossing the line in 69:50.