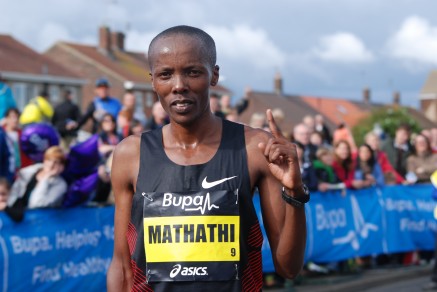 Last year on his Marathon debut, Mathathi dropped out of the Fukuoka Marathon just after 35km, but this year, on a humid day when the temperatures hovered around 9 degrees celsius, he showed that he had clearly learned his lesson, as this was the point where he took control of the race.

Taking the lead with 10km to go, Mathathi started to push the pace hard in the final seven kilometres to leave his final challenger and compatriot, 2012 Fukuoka winner Joseph Gitau, having to settle for second place. As an example of how hard Mathathi worked in the closing stages, he covered the stretch between 35 to 40km in 14:39, the second fastest split ever for this part of the race.

Mathathi’s winning time of 2:07.16 was the third fastest by a PACE athlete this year.

Vivian and Moses win at the Great South Run