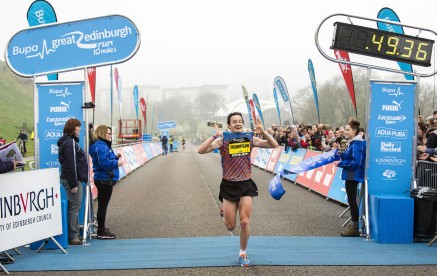 27th April 2014 – Just two weeks on from his marathon debut Chris Thompson (GBR) was out testing himself on the roads again, this time at the Great Edinburgh 10 miles race.

Content to sit at the back of the lead group for the first half, Thompson made a move in the 7th mile and continued to steadily stretch his lead to the finish. He crossed the line in 49:36, finishing 18 seconds ahead of runner-up Lee Merrien.

“I think Lee hates me right now because I just sat right behind him and did nothing for six miles,” Thompson said. “Once we hit that mile I kicked on then, so I could cruise down the last mile without worrying.

“I’m probably going to still feel London for the next couple of weeks. I can’t believe I run 49  minutes. It felt like we were running at 52 minute pace, which is a good sign. I just need to freshen up and bring out that fitness for the summer.

“It’s my first Great Run win, so it’s nice to get that under my belt.”

Over in Germany, former World Championships Bronze medalist Moses Masai (KEN) was tackling the marathon distance in Dusseldorf. In wet conditions that made the course more testing than usual, Masai ran a PB of 2:10:36 to take 5th place.