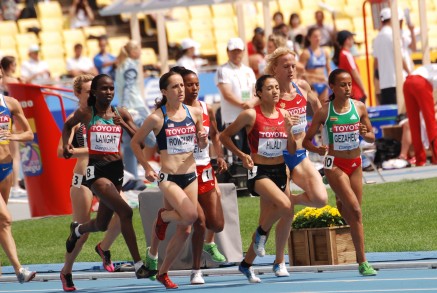 Shannon Rowbury today announced that after she completes her final race of the season this weekend at the Fifth Avenue Mile in New York she will relocate to Portland, Oregon to be coached by Alberto Salazar as a member of the Nike Oregon Project.

“I am pleased to announce that I will be coached by Alberto Salazar and join the Nike Oregon Project. This is an exciting time in my career as I will join the likes of Olympic and World Championships medallists Mo Farah, Galen Rupp and Matthew Centrowitz in one of the world’s top distance running groups. I spoke to Alberto several times over the past few months and feel he is the right person to take me to the next level in my running career and further explore my potential in both the 1500m and 5000m on my road to the 2016 Olympic Games in Rio.”

The 28 year old San Francisco native was previously coached by John Cook with assistance from Tom Kloos and the Bay Area Track Club. Coach Cook guided her to World Championships 1500m bronze in 2009 in Berlin, 6th and 7th place finishes in the last two Olympic Games and two USATF outdoor 1500m titles (2008 & 2009). Last month she placed 7th in the 5000m in the World T&F Championships in Moscow.

“I would like to thank Coach Cook for everything he has done for me since I graduated from Duke University in 2008. He has taught me so much and I will remain close to him. I wish him a happy and stress free retirement/semi-retirement not having to plan my next workout or worry about my weekly mileage.” Earlier this month Shannon announced her engagement to Mexican 1500m runner Pablo Solares.