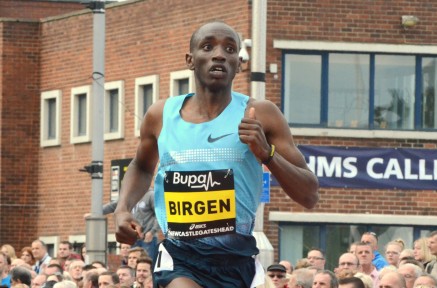 29th January 2015 – For the second year in a row Bethwel Birgen (KEN) won his first indoor race of the year at the PSD-Bank Dusseldorf meeting.

On the tight 4 lane track Bethwel was always towards the front and staying out of trouble as the field did not follow the pacemaker. He made a strong run for home with 400m remaining and withstood the challenge of home athlete Homiyu Tesfaye fairly comfortably. Bethwel crossed the line in 3:40.58 for a pleasing season opener. Vincent Kibet (KEN) was not only making his 2015 indoor debut, this was indeed his first ever indoor race. Although he was disappointed with his sixth place finish he learned a lot about indoor racing and both athletes will be looking to run quicker in Moscow on Sunday.

PACE also had two athletes running in the 800m and Jeremiah Mutai (KEN) showed good strength over the final 100m to pass Kevin Lopez and win his race. Jeremiah timed 1:48.18 with a fast finishing Andrew Osagie (GBR) taking third in 1:49.21.