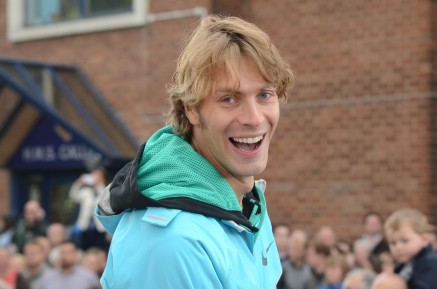 There really was a home victory in the mens Long Jump at the Great North City Games. With events taking place on the quayside of Newcastle and Gateshead it was north-east native Chris Tomlinson (GBR) who took the win with a jump of 7.83m. Indeed Tomlinson handled the cold and blustery conditions far better than anyone to post the best 3 marks of the competition.

Leo Mazano (USA) finished strongly in the mens mile but just failed to overhaul Garrett Heath (USA). However, his second place finish gives him a nice run in to next weeks Fifth Avenue mile in New York. Bethwel Birgen (KEN) finished a season which has seen him run pbs at both 1500m and 3000m with a fourth place finish here. Running over distance for their last races Michael Rimmer (GBR) and Andrew Osagie (GBR) finished ninth and eleventh respectively.

World Championship Bronze Medalist Hellen Obiri tried to run away from womens 1 mile field but after a long season didn’t have the strength to hold on and had to settle for sixth place.

In the final race of the day the large crowds who were packed in close to the track were delighted to see World 400m Champion Christine Ohuruogu (GBR). Stepping down in distance to 150m was always going to be a big ask for Christine and on this occasion she finished third. Perhaps not the way she would have liked her season to end but she will will be able to console herself with the fact she not only regained her world title but also is now also the British record holder.