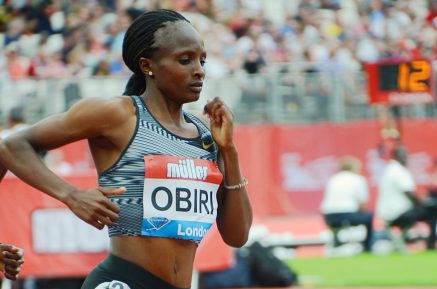 21st July 2019 – For many years Hellen Obiri (KEN) has used London as her base for the summer season and she once more showed how much she enjoys racing in the English capital.

Dina Asher-Smith (GBR) put on another strong performance in front of her home crowd. Having won her 100m heat in 10.91 seconds, she backed it up with 10.92 seconds in the final to take second place.

Winny Chebet (KEN) ran an excellent tactical race in the 1500m and made a welcome return to the sub 4-minute club by taking second place in 3:59.93.

There was a special event at the start of the meeting where former legends competed in a 4x100m relay race. PACE athletes Christine Ohuruogu (GBR), Mark Lewis-Francis (GBR) and Andy Turner (GBR) all received a warm welcome and safely navigated their way through their return to the track!

At the KBC Night of Athletics in Heusden, Ristananna Tracey took second place in the 400m hurdles with a time of 56.46 seconds. This followed victory earlier in the week in Liege where she timed 56.53 seconds.