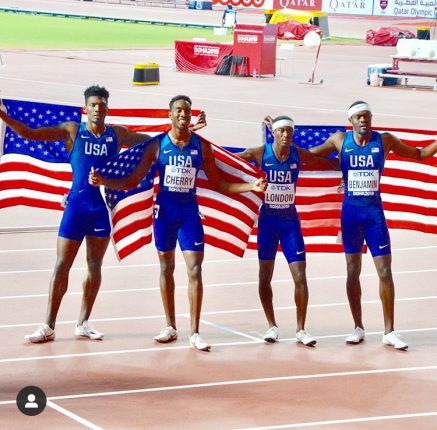 6th October 2019 – There was further medal success for Fred Kerley (USA) on the final night of the IAAF World Championships in Doha.

Having won the individual bronze medal over 400m earlier in the week, Fred and his American quartet combined to run the fastest 4x400m relay for eleven years and cement the gold medal. Running the opening leg Fred got his team off to the perfect start with a split of 43.44 seconds, putting them in the lead and they were never headed from there, coming across the line well clear in 2:56.69

Earlier in the session Olympic Champion Matthew Centrowitz played his part in another extraordinary track final. The 1500m was viewed as wide open but Kenyan Timothy Cheruiyot led every step of the way, winning in 3:29.26. This led to some National Records, personal bests and seasons bests further down the field, which included Matthew who took eighth place in a seasons best 3:32.81.

This completes the 2019 outdoor track season for PACE athletes who can now take a well-earned break before preparations begin for the Olympic year of 2020.