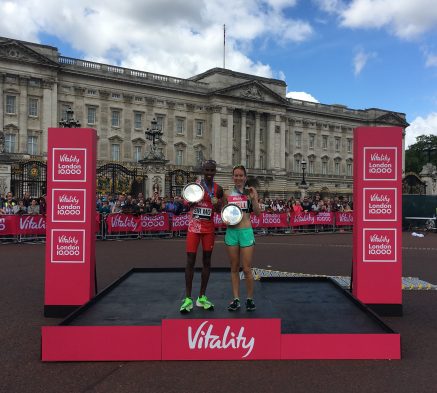 27th May 2019 – Sir Mo Farah (GBR) and Steph Twell (GBR) gave the crowd a sense of déjà vu as they both defended their British 10k titles on Bank Holiday Monday.

The men’s race developed into a three-way battle with Mo and fellow internationals Andrew Butchart and Nick Goolab establishing a gap over the rest of the field early on. Butchart was surging to try and make a break but Mo was able to cover everything and then with 2km to go made a surge of his own. This moved him clear and allowed him to wave and acknowledge the crowd over the final stages as he crossed the line in 28:14 to take the win at this event for the seventh time.

The race played out differently for Steph as she moved clear from the start in the women’s race and was in a bigger battle with the men around her and the clock as she chased a quick time. She was richly rewarded for her aggressive front running by not only retaining her title but also a new PB of 31:55.

Steph and her husband Joe also made a bit of history the previous day when they broke the world record for the mixed hand in hand mile incorporated into the Westminster Mile events. They smashed the previous record of 5:24 and became the first couple to go sub 5 minutes with a time of 4:50.

Sir Mo back on track