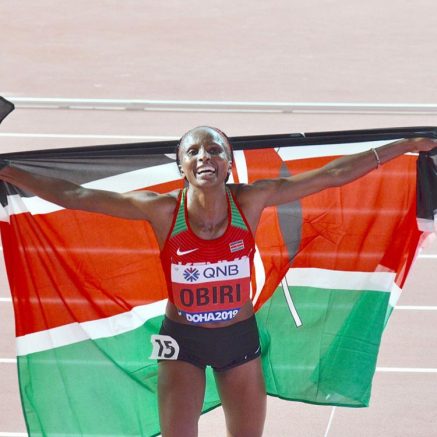 5th October 2019 – Hellen Obiri (KEN) defended her world 5000m title on another incredible night of action at the Khalifa International Stadium in Doha.

After being disappointed with her fifth-place finish in the 10,000m earlier in the Championships, Hellen bounced back here and more than earned her victory. Personally leading the majority of the race Hellen kept the tempo high, passing the kilometre splits in 2:56, 5:52, 8:44 and 11:45. However, approaching the last 400m there was still six women in contention but Hellen showed her experience as she refused to be passed and kept control of the race. A 58.4 second final lap brought her home victorious in a new Championship Record of 14:26.72 and ensured she retained the title she won in London two years ago.

Dina Asher-Smith (GBR) made it a hat-trick of medals as she ran the second leg for the Great Britain team that won silver in the women’s 4x100m relay. This made Dina the first British athlete to win three medals in one World Championships.

Winny Chebet (KEN) ran a new personal best of 3:58.20 for seventh place in arguably the greatest women’s 1500m race ever. A championship record, four national records and multiple more PB’s were set as nine women ran under the 4 minute barrier.