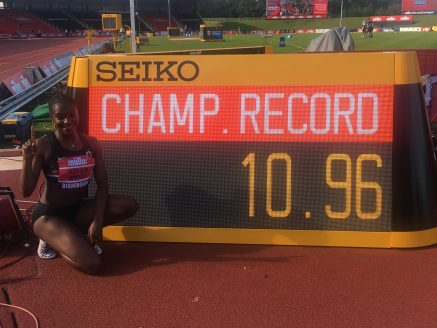 25th August 2019 – Dina Asher-Smith (GBR) and Matthew Hudson-Smith (GBR) not only defended their British titles, but both booked their tickets to the World Championships in Doha later this year in the process.

Despite strong headwinds tormenting the sprinters all weekend Dina demonstrated the great form she is in. A hard run out in the semi-final saw her clock 11.03 seconds into a -2.0 wind, and then in the final she broke the Championship Best Performance by running 10.96 seconds into a -0.9 wind.

Matt’s season has been delayed by injury, but he showed that he is getting fitter every week as he ran a seasons best in both his heat and then the final. Clockings of 45.93 and then 45.15 put him well clear of his rivals and now with more than a month until the World Championships and time to fine tune his preparations.

A former Champion Perri Shakes-Drayton (GBR) gave a very good account of herself after also battling injuries of her own. She upset the formbook to make the women’s 400m final (running a seasons best of 53.13 seconds) and then took sixth place in the final in 53.60 seconds.

At the IAAF Diamond League event in Paris, Bethwel Birgen (KEN) ran his fastest time for five years as he took fifth in a high quality 1500m. Bethwel ran 3:31.45 as the first ten athletes all ran inside 3:32.00! Training partner Vincent Kibet ran 3:34.08 for thirteenth.

Shannon Rowbury (USA) made her European and 1500m debut for the season at the permit meeting in Madrid. She took eighth place in 4:15.65.