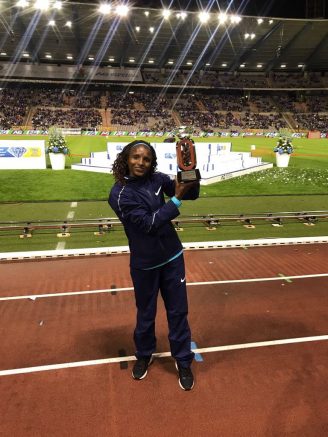 1st September – World 5000m Champion Hellen Obiri (KEN) gave one final example of why she has been the outstanding female distance runner in the world this year with another victory at the IAAF Diamond League final in Brussels.

As has happened on several occasions Hellen found herself at the head of the 5000m field once the pacemakers had dropped out shortly before 2k. However, Hellen appears to enjoy dictating the pace and using her strength to lap by lap whittle the number of challengers down. Then over the closing stages, showing she still possesses the speed that made her a 3:57 1500m runner, Hellen moves away and crosses the line the victor. Much the same story unfolded here with Hellen winning in 14:25.88.

2017 has been as good as perfect for Hellen as she has won the IAAF World Indoor Tour, the IAAF World T&F Championships, and now the IAAF Diamond League Final.

Good friend and occasional training partner Winny Chebet (KEN), has also enjoyed a successful summer season. As well as running PB’s at 800m, 1500m and the 1 mile distances, Winny has transitioned into a world class 1500m runner and finished 3rd in the 1500m final here fighting all the way up the home straight to record a time 4:00.18.

Brussels marked the end of the outdoor track season for many athletes but some PACE athletes will still be in action at the Great North City Games in Newcastle next weekend.