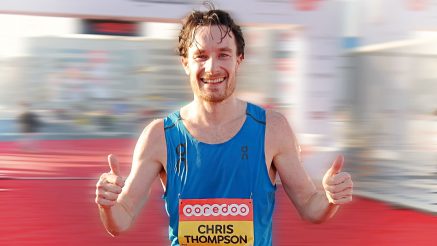 1st March 2020 – 22 years since earning his first British vest, Chris Thompson (GBR) showed he is still amongst the finest British athletes around by winning the British Half Marathon title.

The championships were held within The Big Half event on the streets of London and from the gun Chris took the race by the scruff of the neck.  Despite having one of the finest distance athletes of all time by his side in the shape of Ethiopia’s Kenenisa Bekele, Chris was not deterred and kept the pace honest meaning the two of them broke away early.  After passing 10km in 28:33 Kenenisa began to forge ahead but Chris stuck to his task and easily took second place in 61:06, a mere 6 seconds outside his personal best.

In the process Chris secured the British title and automatic selection for the World Half Marathon Championships to be held in Poland at the end of the month.